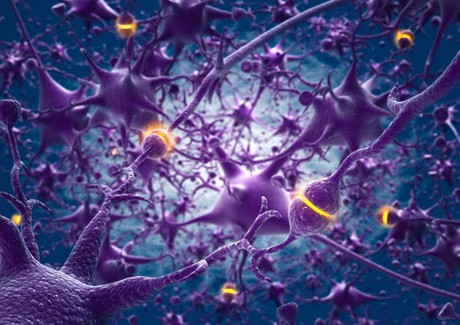 13 Jun 2012 — Neural network. Computer artwork of nerve cells (neurons) connected by processes (filaments), known as dendrites and axons, to form a neural network. The junctions between cells are formed by synapses (bulb-shaped), which transmit electrical signals from one cell to the next. When the signal reaches the synapse it triggers the release of neurotransmitter chemicals (yellow), which cross the gap to the next cell, where they trigger an electrical impulse. — Image by © Springer Medizin/ /Science Photo Library/Corbis